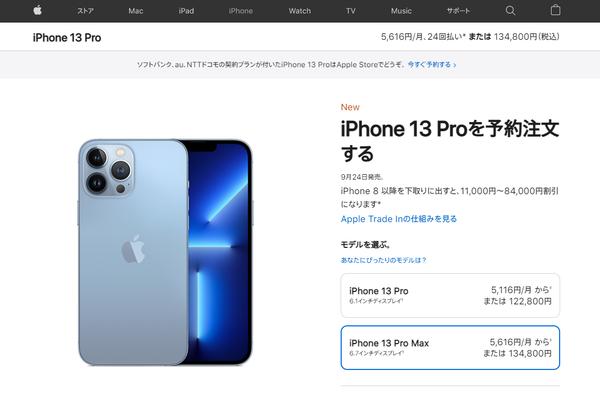 Four models of the iPhone 13 series have been announced and are scheduled to be released on the 24th. In the past, it was common to purchase from the three major carriers of DoCoMo / au / Softbank (Rakuten Mobile also handles the latest iPhone from this year), but recently, regardless of the contract, only the terminal is available at the Apple Store or EC site. It is also possible to purchase.

Therefore, in this article, I will introduce the mechanism of "real burden" that you need to understand in advance when purchasing iPhone 13 from a carrier.

There is no longer a discount like the previous "Monthly Support" Long-term installment payment, reducing the monthly burden on the premise of trade-in of the terminal

Many people will buy a new iPhone for the first time in a while. Until more than three years ago, if you purchased an iPhone from a carrier, you would get a monthly discount of about 2000-3000 yen for 24 months ("Monthly support", "Monthly discount", etc.), but now it is a terminal. It is assumed that sales and contracts will be separated, and these discounts have disappeared.

Before the iPhone XS / XR, there were discounts such as "monthly support" as shown in this table, but such buying methods have already disappeared (the price of the basic plan itself has become cheaper with the introduction of the separation plan).

On the other hand, each model of iPhone 13 is in the high 80,000 yen range even if it is the cheapest. It is quite difficult to purchase the terminal price in bulk, which is often over 100,000 yen. Therefore, each carrier is preparing a device to reduce the "real burden" of the user by paying in installments or returning the iPhone that was used until then after using it for about 2 years. Keep in mind, however, that returning the iPhone means trading it in, not a simple discount.

Also, as you can see by comparing the device prices at the bottom of this article, the cheapest is basically the example of purchasing only the device at the Apple Store or EC site (and purchasing at Rakuten). You can replace the SIM yourself, and even if you need to change the plan, you can check it yourself and do the procedure. For those who have already subscribed to ahamo, povo, sub-brands, and cheap SIMs, we recommend purchasing the SIM-free version (24 installments and trade-in of old models are also possible at the Apple Store).

Even if you purchase only the terminal at the Apple Store, you can pay in installments 24 times by Paidy or trade in your old iPhone.

DoCoMo's "Anytime Kaedoki Program" is a residual value setting type. If you return your iPhone early, you will also get benefits.

From here, let's look at the contents of the program for each carrier. First of all, from the DoCoMo "Anytime Kaedoki Program", which introduced the residual value setting type installment payment from this year.

In this "Anytime Kaedoki Program", the residual value at the time of 2 years is set in advance for each terminal, and the amount obtained by subtracting the residual value from the main unit price is paid from the 1st to the 23rd, in 23 divisions. You will have to pay (the "real burden" if this part is used for 2 years).

If you want to continue using it after 2 years, the residual value will be divided 24 times again and you will continue to pay.If you return it in the middle of the process, you will not need to pay any more. 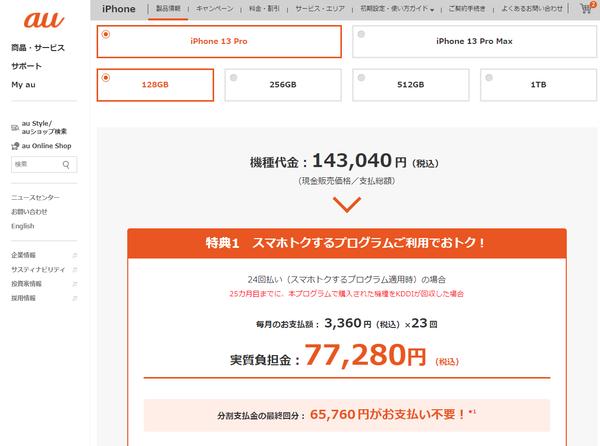 Also, as the name of "Anytime Kaedoki Program" suggests, it can be returned at an early stage. In principle, payment up to the 23rd month is required for early return (lump-sum payment is also possible), but since the terminal is not old yet, its value is high, so installment payment is made as an "early use benefit". The amount is discounted by a certain amount.

When returning two years ago, payment up to the 23rd time is basically required, but the monthly payment after return is discounted as an "early use benefit".

The "Anytime Kaedoki Program" can be used without a DOCOMO contract (there are no conditions such as replacement of terminals at DOCOMO). Also, since it is OK without using the program, you can choose to settle in a lump sum somewhere and continue to use / sell the terminal yourself.

au "Smartphone Bonus" is also a residual value setting type installment payment, and the 24th residual value is predetermined, and paying the 1st to 23rd installments in 23 installments is the same as DoCoMo. You can choose to return the device two years later to eliminate the need for the 24th payment, or to re-split the residual value 24 times and continue using it (lump-sum payment is also possible), and return the device in the middle of the re-installment payment. If you do so, you will not need to pay the rest (the same can be used regardless of whether you have an au line contract).

However, there is no particular merit of + α due to early return like DoCoMo's "Anytime Kaedoki Program".

SoftBank / Rakuten exempts up to 24 payments by returning the device after paying 24 payments in 48 installments.

Next is Softbank "Support +". The content has not changed since last year. After paying 24 or more installments in 48 installments, returning the device will exempt the remaining bonds. In other words, the "real burden" is half the terminal price.

Rakuten Mobile's "iPhone Upgrade Program" also pays 48 times, and if you return the device after paying 24 times, you do not need to pay up to 24 times. However, it should be noted that the payment method is limited to "Rakuten Card".

Rakuten is basically the same.However, it is big that the terminal price itself is about the same as the Apple Store.

If you pay in installments by carrier, there is no loss even if you enter the program However, it should be understood that "trade-in of the terminal" is a prerequisite.

There are minor differences in the content, but basically the same point is that the "real burden" is reduced on the assumption that the iPhone that was used until then will be returned, that is, traded in. I want to know that it is completely different from "discount" in the first place. However, there is no particular charge for subscribing to the program itself, so if you purchase an iPhone from a carrier in installments, it can be said that there is no loss in entering it for the time being.

That said, the iPhone basically has a high resale value, and it takes a little time and effort, and it is a condition that it is used carefully, but it is not impossible to dispose of it at a higher price at specialty stores and flea market apps. Also, as mentioned above, you can buy just the device from the Apple Store (all iPhone 13s, including models sold by carriers, are not SIM-locked). The rest will be up to the user's judgment.

The actual burden amount is stated when the terminal is returned after using it for 2 years, and when the point of the initial contract privilege is included at the time of MNP of Rakuten Mobile.